We have a winner! Our Pittsburgh Steelers continued to roll in the snow with yesterday's 27-20 win in Buffalo. Mrs. Black-N-Gold looks back at yesterday's victory with The Good, The Bad & The Ugly from the game.

The Steelers defense continued to improve. They recorded 5 sacks, snagged an interception and held the NFL's best rushing team to just 67 yards. The youngsters, especially, contributed to the cause. LB Ryan Shazier registered a sack, a tackle for loss, a QB hit and led the way with 8 tackles. Rookie S Sean Davis had 1.5 sacks, 1 TFL, 3 QB hits and was 2nd on the team with 7 tackles. LB Bud Dupree sacked the QB twice and had 3 TFLs. DL Stephon Tuitt had half a sack, 1 TFL and 1 QB hit. Rookie CB Artie Burns snagged another INT, too. Yes, to quote Coach Tomlin, the defense's "arrow is pointing up".

The offensive line had another stellar game, as well. They did not allow QB Ben Roethlisberger to be sacked at all yesterday. They also paved the way for a record rushing day for RB Le'Veon Bell. Which leads us to.....

With apologies to the Steelers D and the O-Line but the best player on the field yesterday was #26, LBell. He calls himself "Juice" but the Beast should really be called "The Mailman" because he continues to deliver. Neither ran, nor snow, etc. could stop Bell. He set a Steelers rushing record yesterday running the ball 38 times for 236 yards, a 6.2 yard average and 3 TDs. The Beast also caught 4 passes for 62 yards. On a day when the Steelers passing game was neutralized due to the weather conditions, it's great to have a road-grading offensive line and a steamrolling back in Bell. Congrats to Le'Veon for the record!

As good as Bell was yesterday, his QB was just as bad. Roethlisberger was just 17 of 31 for 220 yards, 0 touchdowns and 3 INTs for a lousy 37.8 QB rating. Was it the fact that the weather was bad, the Steelers were on the road or both? Good thing for Ben that Bell bailed him out. #7 is going to need to improve on the road with the Steelers away from home for 2 of their final 3 games. And unless they win their division and, instead, get into the playoffs as a wild card, they could be on the road in the postseason, too. Ben needs to needs to improve his play if the Steelers hope to have a long run towards the Super Bowl.

Taking a look at the standings, the Steelers continue to hold the top spot in the AFC North at 8-5. The Baltimorons travel to New England tomorrow night so right now they're 2nd at 7-5. Cincy won yesterday to stay in 3rd place with a 5-7-1 mark. The Clowns were losers to Cincy and remain in the basement with a record of 0-13.

Next week the Steelers travel to Cincy for a 1pm kickoff. They need to continue to stay in the win column to stay in the playoff race. You gotta win to get in. Let's Go Steelers!!!!!! 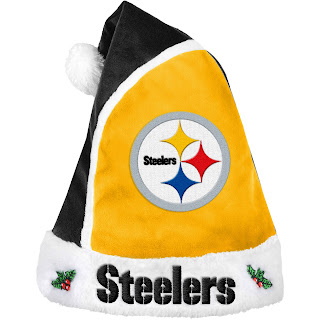