Did you ever notice the bands that Root Sports would feature during Pirates season as part of their Friday Night Rocks promotion? Mrs. Black-N-Gold always liked the idea since it was an opportunity to catch some local bands that she may not normally see (hear). This summer she got hip to The Commonheart, a Pittsburgh area collective of soul scorching music led by singer/heartbeat, Clinton Clegg. Upon hearing a clip of this band, Mrs. Black-N-Gold took to the internet to see if she could soak up the soul live and in-person. They had a gig this summer with the legendary Billy Price. But, alas, it was sold (souled?) out. Then, Mrs. Black-N-Gold found out that The Commonheart were releasing their debut CD, "Grown", with a release party at Mr. Small's Theatre in Millvale. It would require an overnight trip by Mrs. Black-N-Gold and The Big Bossman but it was well worth trip.

How appropriate that there is a picutre of a cake on the CD cover, because this disc is one tasty treat. The 10-piece band comes together with some of the sweetest sounds this side of Stax Records. Prior to the show, Mrs. Black-N-Gold read reviews that compared Clegg to the aforementioned Price. She was reminded more of late greats Joe Cocker and Otis Redding. And the musicianship evokes images of Booker T and the MG's as well as Redding's backup band, The Bar-Kays. And guitarist, Michael Minda, is Pittsburgh's latest guitar hero, ready to unleash his fretboard fury on the world.

This CD has it all. There are poignant, haunting tunes such as "Rivertown" and "Spain" that seem auto-biographical, perhaps hearkening back to Clegg's upbringing in Monongahela. "Canonball", "Hold My Hand", "You Need A Man", "Questions" and "Save Me" all sound like something straight out of the Stax songbook. "You Need a Man" especially conjures the soul of Redding. But, of course, Mrs. Black-N-Gold is all about the hard-charging, rock-tinged tunes. This disc leads off with 2 home runs, "Who Dat Mama" and "Hard Way". There is also a searing version of the Al Green classic "I'm a Ram". But Mrs. Black-N-Gold's favorite on this fabulous CD is "Alosysius". It's got it all and then some. Rock & soul, what a wonderful combination.

In a day and age where it's so hard to get excited about anything new in the music industry, The Commonheart has come full-circle, putting a new spin on classic soul. Call it, Black-N-Gold Soul, if you will. "Grown" is an excellent Christmas gift for the music-lover in your life.

If you'd like a chance to see The Commonheart live, and why wouldn't you, they are at the Rex Theater with the aformentioned Billy Price this week. It's a holiday show filled with Black-N-Gold Soul on the Southside on Saturday night. They also have a show scheduled at Dante's Bar in Frostburg, MD set for New Year's Eve. Mrs. Black-N-Gold is trying to swing at least one, if not both, of these shows. So see The Commonheart now and thank Mrs. Black-N-Gold later. 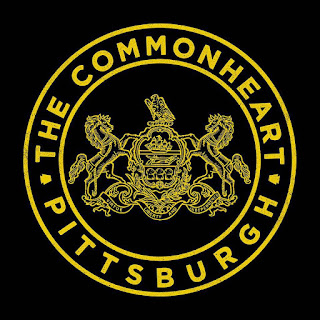