Another Sunday, another win for our Steelers. Yesterday they grounded the New York Jets 31-13 in front of the home crowd at Heinz Field. Mrs. Black-N-Gold brings to you The Good, The Bad and The Ugly from yesterday's victory.

There were so many good things from this game, Mrs. Black-N-Gold doesn't know where to start. There was QB Ben Roethlisberger's performance: 34 of 47 for 380 yards and 4 touchdowns for a 124.4 passer rating. Ben was so good, at one point he rattled off 14 straight completions. 2nd year WR Sammie Coates had quite the day, too. Sammie hauled in 6 passes for 139 yards and 2 TDs, the 1st 2 of his career. Sammie had a case of the dropsies for awhile there but recovered nicely. WR Antonio Brown had 9 receptions for 78 yards, 1 touchdown and zero penalties for TD celebrations. However, the uniform police made him change his shoes mid-game as the Ali-inspired cleats were a violation of the league's uniform code. RB Le'Veon Bell caught 9 passes for 88 yards and rushed 20 times for 66 yards.

The defense got to Jets QB Ryan Fitzpatrick many times, registering 3 sacks, .5 each by LBs Lawrence Timmons and Arthur Moats, LB Anthony Chickillo recorded his 1st NFL sack and LB Vince Williams continued his impressive play by getting 1 sack to go with his team-high 9 tackles, 8 solo. Vinny Vin also had 3 tackles for loss and 2 QB hits.

All in all, things were impressive on the field for our Favorite Black-N-Gold Football Team. They continued to buzz along as they said "so long" to the bumblebee uniforms yesterday.

But the best of the "good" goes to "The Next Man Up". This team has faced a myriad of injuries lately, and the replacements have stepped in and stepped up without the team missing a beat. No one wants to see their starters go down with an injury. Everyone wants to see the back-ups play as well in their place.

The coaches almost had another perfect week where they could do know wrong. Notice, Mrs. Black-N-Gold said "almost". In the 2nd quarter, with the Steelers clinging to a 7-6 lead and looking at a 4th and 2, the Steelers lined up for a 46-yard field goal attempt by K Chris Boswell. But instead of kicking and possibly going up 10-6, Coach Tomlin decided to have P Jordan Berry attempt to run to the outside for a 1st down. That attempt failed miserably. The Jets then took over on downs and marched down the field for a touchdown and a 13-7 lead. Now, if this had worked, everyone would be praising Coach T for his genius move. Instead, it blew up in his face like a Wil E. Coyote Acme bomb. It could have spelled disaster for the Steelers but they were able to recover and secure their 4th win of the season against the 1-4 Jets. The Wizard of Boz has been nothing but money in the bank since the Steelers signed him off the street last year. Why try to have a punter outrun linebackers when you can get 3 points from Boswell? Bad move, Coach.

It was ugly the way the Steelers let the Jets hang around for so long. The Steelers didn't really take control of this game until about half way through the 4th quarter. And they should send Jets Coach Todd Bowles a Thank You Card for it. Instead of going for it on 4th and 2 and keeping a drive alive that may have kept New York in the game, Bowles opted to punt and give the ball back to the Steelers. The Steelers took full advantage of that opportunity, finally, putting the Jets away for good. The Steelers play another awful team next week in the Miami Dolphins. Don't let them hang around, too.

The Steelers sit all alone atop the AFC North with their 4-1 record. The Baltimorons fall to 3-2 following their loss. The Bungles also lost, making them 2-3. The Clowns continue to be laughable at 0-5.

On Sunday, the Steelers take a road trip to Miami and try to sink the 'Phins. They can't take them too lightly, nor look ahead to New England's visit the following week. Stay focused and take it one game at a time. Let's Go Steelers!!!!!! 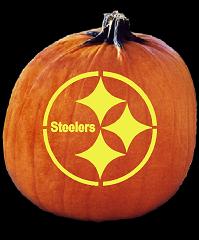