The Pirates returned from the All-Star break with a trip to Washington DC for a 3-game set with the NL East-leading Nationals. The Bucs dropped the opener on Friday 5-1. They recalled RH Gerrit Cole from his Indy rehab assignment to start the 2nd game of the series. To make room, 1B/OF Josh Bell, was sent back to Indy. Cole promptly went out and lost in his return from the DL by a score of 6-0. Mrs. Black-N-Gold & Brother Black-N-Gold were in town visiting their Black-N-Gold Niece and to see if the Buccos could salvage the final game on Sunday. It took them 18 innings but the Pirates prevailed 2-1.

Before Tuesday's opener in the 3-game series against the Brewers at PNC, the Pirates made more roster moves. RH Jameson Taillon came off the DL and Frankie C was reinstated from his rehab assignment. RH Chad Kuhl was optioned back to Indy. C Erik Kratz was designated for assignment.

The Pirates won game one against Milwaukee in walk fashion 3-2.

Another roster move was made as C Elias Diaz came off the 60-day DL. He was optioned to Indy.

The Pirates then lost the next game to Milwaukee 9-5. They won the rubber game 5-3 to take the series.

It was announced that Kratz refused his assignment to Triple A. He is now a free agent.

Our favorite Black-N-Gold baseball team opened a series with their cross state rivals, the Philadelphia Phillies, on Friday night. They fell to Philly thanks to a 3-hit, complete-game effort by their rookie pitcher on his way to a 4-0 win. Following the game, the Bucs said that RH Tyler Glasnow would pitch Saturday's game, making his PNC Park debut. The rookie didn't fare well when he left the game with right shoulder discomfort. The Buccos were able to rally for a 7-4 win.

When Glasnow was brought up, the Bucs sent RH AJ Schugel back to Indy to clear a roster spot. Another move was made as C Eric Fryer was placed on the paternity list. Diaz was brought up to take his place. Schugel didn't even make it out of town. The Pirates recalled him when they placed Glasnow on the 15 day DL.

The Pirates came back to edge Philly in Sunday's finale 5-4. In that game Diaz drove in his first run in the big leagues. Also, Adam Frazier knocked his first MLB home run. His pinch hit homer was the deciding factor. Congrats to both Elias and Adam!

Our Steelers said goodbye to TE Matt Spaeth this week. The veteran tight end was released after failing a physical.

The Steelers also received some decidedly bad news this week, one week before training camp. News broke that RB Le'Veon Bell would be suspended for 4 games after missing a mandatory drug test. Bell is expected to appeal. The rumor of this suspension floated around for the past month. It was said that both Bell and the Steelers had been aware of this for some time. Bell had denied the suspension when confronted with it in the past. Mrs. Black-N-Gold can't help but wonder why our favorite Black-N-Gold football team didn't draft a running back in this year's draft. Bell has a history of both injury and suspension. Now D'Angelo Williams (another injury-prone back and on the wrong side of 30) will be #1 on the depth chart. He'll be followed by Fitzgerald Touissant. You may remember Touissant. The last time Steelers fans saw him, he was fumbling away the ball and the game in Denver. But wait! The Steelers DID sign rookie free agent running back Brandon Johnson out of Penn State. That depth chart doesn't elicit a whole lot of confidence now, does it?

Hopefully things will take a turn for the better once training camp begins. See ya in Latrobe. Let's Go Steelers!!!!!!

No news from our Penguins as our favorite Black-N-Gold hockey team continues to make the rounds with the Stanley Cup. If anyone hears that the cup is coming Mrs. Black-N-Gold's way, to Washington County, please contact her immediately. She can't find her picture with the Cup from 20 years ago and wants to get a new pic with it.

Until then, we countdown the days until we raise the banner and drop the puck. Let's Go Pens!!!! 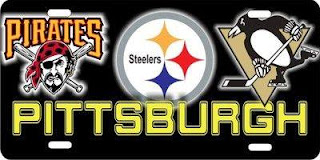